My neurologist father maintained that hand-washing was our family’s single greatest obligation to one another and to the world. “As you know, it’s the No. 1 way to prevent disease transmission,” Dr. Beauregard Lee Bercaw would say to my brother and me every single night before sitting down to dinner. “Your hands are clean, right?”

If we hemmed or hawed, we were banished to our bathroom to scrub as if we were surgeons, not children. Sometimes he’d stand behind us at the sink and provide a verbal inventory of ailments caused by poor sanitation and hygiene, throwing in the names of diseases he’d seen during his years spent practicing medicine in the tropics during the Vietnam War but found nowhere near our Florida home: “Meningitis … Hepatitis … Salmonella … Staphylococcus … Streptococcus … Giardiasis … Schistosomiasis … Cholera … Typhoid…”. His litanies would last for at least 30 seconds, so there was no need for either of us to mumble through “Happy Birthday” twice. 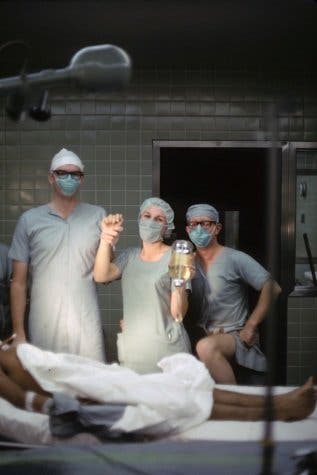 But as the years passed, I grew increasingly numb to my father’s germ warfare tactics and ever more reluctant to follow his orders. By age 14, my focus was on improving my appearance with acne treatments and avoiding the watchful eyes of my father. By lingering in the bathroom, I was able to do both.

After a protracted cease-fire in the hand-washing wars, I was ambushed one afternoon when I was 15 by a loud pounding on the bathroom door. I opened it to see my father’s face twisted with fresh worries as he conveyed an ominous message in a matter-of-fact tone: “Kelly Dineen is going blind in her right eye because she didn’t wash her hands.”
Kelly, who was my best friend and the daughter of my father’s best friend, had woken up one morning with blurry vision in her left eye and, two days later, had lost most of her central vision in it. One of the early theories, propounded by my father, was that she’d contracted toxoplasmosis from cat feces, though later a leading eye doctor had diagnosed her as having an inflammatory disorder called multifocal choroiditis, a condition that had nothing to do with whether or not she had washed her hands.

It wasn’t until many years later, as a Peace Corps volunteer living in a rural village in Kenya, that I finally joined my father’s army of fanatical hand-washers. For the first few months in my rural village, I was plagued by diarrhea. Only by scrubbing methodically before every meal with boiled water and soap could I avoid getting sick. The correlation between cleanliness and health suddenly became clear and present in my life.

Now, amid the coronavirus pandemic and a gradual loosening of restrictions as shutdowns ease, I find myself lamenting what seems to be reluctance among some people — including my 16-year-old son — to wash their hands as if their lives depend upon it. Why do we have to keep reminding others to perform this one simple but potentially lifesaving act?

Dr. Leana Wen, an emergency physician and public health professor at George Washington University, who previously served as Baltimore’s Health Commissioner, told me that it’s indisputable that hand-washing saves lives. “In the hospital, hand hygiene is strictly enforced to reduce the spread of infections,” she says. “In the community, hand-washing is key to reducing person-to-person transmission of many illnesses, from respiratory illnesses like the cold and flu to food-borne illnesses like salmonella and cholera.”

Dr. Elaine Larson, professor emerita of nursing research and professor emerita of epidemiology at Columbia University, who is considered one of the world’s leading authorities on hand hygiene, agrees. In 1980, Dr. Larson wrote her dissertation on hand-washing and devoted the subsequent 40 years to studying infection prevention and spreading the message that “clean hands save lives.”

“I don’t think that people are reluctant, but every decision we make occurs because of habit as well as a quick, unconscious risk-benefit assessment, and then we ‘decide’ that we are safe,” she says. “Most people from childhood ‘learn’ that they can often omit hand hygiene with no consequences, so that reinforces that it is not an essential habit.”

But even in times like these, she says it’s “difficult to link the cause — not washing — and the effect — getting sick — when there is a time lag between the two and when it does not occur 100 percent of the time.” Another obstacle to normalizing hand-washing is what psychologists call “optimism bias,” which leads many of us to believe bad things are more likely to happen to others.

So is there any hope of convincing people that an ounce of prevention is worth a pound of cure, especially when it comes to Covid-19? Does hand-washing stand a chance of becoming part of the new normal, like wearing seatbelts did once we fully realized their impact on saving lives?

Dr. Larson explains that it’s always easier to change a system than to change behavior. “Cars now beep to remind us of wearing seatbelts. In hospitals, we are testing ways to notify staff when they need to wash, but those systems still need a lot of work,” she says. “Something like that may happen eventually in, for example, public restrooms and airports.”

In 2009, the London School of Hygiene & Tropical Medicine studied the impact of intervention messaging in public bathrooms at rest areas along highways in England. Out of 14 different messages, “Is the person next to you washing their hands?” proved to be the most effective at changing behavior. So if we all start washing our hands more, others may be more likely to follow.

I followed up with my old friend Kelly Dineen, now a clinical psychologist with a private practice in Chicago, for her take on the situation. She suggested that those who remain indifferent or resistant to the cause should hang notes in their bathrooms and around the house to establish and cultivate the habit.

“Our minds are uniquely built to make things we do repetitively unconscious,” she says. “Think about brushing your teeth. Do you actually have to think about the many steps involved? No, you can brush your teeth and think about the day ahead. Similarly, if washing your hands is linked to mealtimes, going to the bathroom, and coming in the door, it becomes an automatic behavior.”

“Challenge yourself,” Dr. Dineen added. “This virus will remain with us. Don’t become its unwitting friend. Commit to one change,” she adds, “And if not for you, then for the people you love.”

If my father were still alive, he’d likely be knocking on bathroom doors everywhere — wearing a mask and surgical gloves, of course — to tell people that they can literally take matters into their own hands. I can hear him now: Thirty seconds of scrubbing from fingertips to forearms with hot water and soap could impact the course of a global pandemic. Why wouldn’t you do it?